As in previous years, Ian again teamed up with LayLaw Racing's Eddie Laycock and Gerry Lawlor to ride their TZ 250 Yamaha in the Lightweight Classic TT, and in the Senior Classic TT event Ian was once again entrusted to compete on the iconic MV Agusta owned by John Chapman. 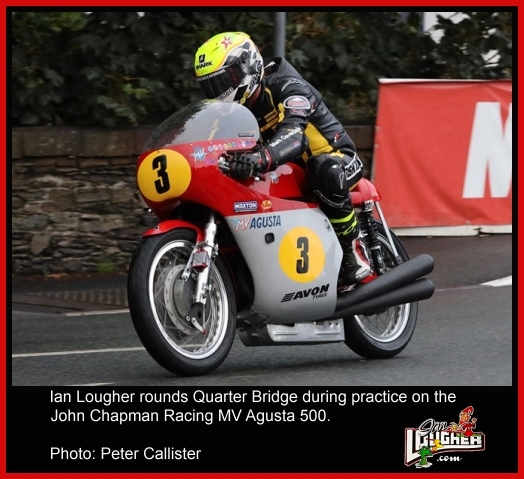 Practice week could best be described as something of a non-event, with bad weather blighting the practice programme and leaving very little in the way of track time and bike set-up.

A few sessions did manage to survive the weather however, with the Yamaha going well and Lougher near the top of the Lightweight leaderboard.

Senior practice was a different story however with the MV struggling, and Ian having the misfortune to stop twice and not get a complete lap in.

Better weather thankfully arrived for race week, but the hard-working and professionally run John Chapman team had faced a race against time on the MV and unfortunately had to withdraw from the Senior Classic TT on Saturday afternoon, as Ian set his sights on the Lightweight Classic TT in the evening.

Riding at Number 3, he soon settled into his trademark steady rhythm on the first of the three lap race, as Bruce Anstey set a blistering pace to lead the race at Glen Helen, where Lougher went through the first timing point in fifth place.

Ian pitted at the end of the first lap and the layLaw Racing team superbly and efficiently got him up and running again in one of the fastest pit-stops of the race at just over 40 seconds.

The Welshman was riding brilliantly and was now up to third, just 15 seconds behind Davey Todd as the lights showed for the riders at Cronk ny Mona on Lap Two.

Going on to the final lap, Lougher still held third and was 8 seconds up on Jamie Coward, but the threat from behind was now coming from a hard charging James Hind who had earlier received a time penalty for a pit-stop infringement.

As they reached Ballaugh, Hind was now fourth just 3.4 seconds down on Ian and by the time they reached Ramsey Hairpin Hind had moved into third and he held on over the Mountain section to clinch the last podium spot from Ian who brought the LayLaw Racing Yamaha home in a secure fourth, but it had taken the fastest lap of the last circuit by Classic TT revelation Hind to overhaul Lougher.

So a mixed Classic TT bag for Ian Lougher with the disappointment of a non-start in the Senior TT made up for by a fine ride in the Lightweight race.

"The Classic TT is a meeting I really look forward to, it's not just that I get to ride two brilliant proper racing machines, but also get to work alongside two fantastic groups of people, with Laylaw Racing and John Chapman Racing.

I felt so sorry for John and the guys that we couldn't get to even start the Classic 500 race this time, after having a number of issues with the MV 500 in practice, but after a weather torn and short practice week unfortunately we were up against it to get the bike ready in time. Hopefully next time..!!!

The 250cc (Lightweight) is probably the best machine for me, it's a hard class to get the best out of the engine, carburation wise, but the most rewarding when things come together.

The Laylaw Yamaha TZ250 is a great bike and this time I think Eddie and the rest of the guys got it nearer than ever with the jetting, but although I felt I rode well I finished 4th and off the rostrum....sorry chaps.!!

But the most pleasing sight...even though I couldn't stand up there with him, was seeing Bruce back on a bike and climbing to the top...lost for words.