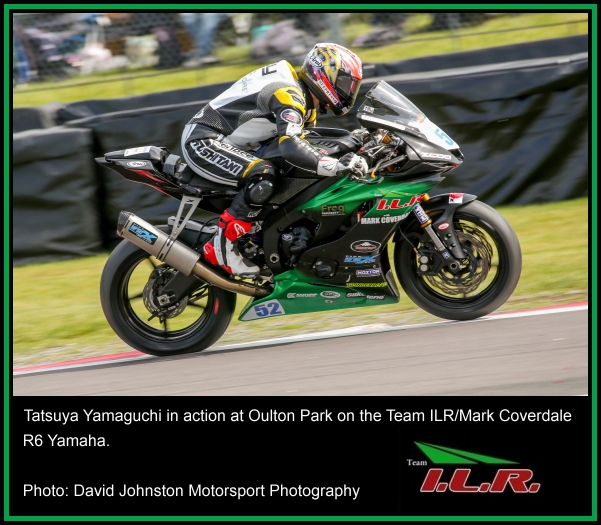 The British Supersport Championship made the traditional May Bank Holiday trip to Oulton Park, and for Team ILR'sJapanese rider Tatsuya Yamaguchi it was the second of his two rides for the team on what was again an unfamiliar circuit for him.
However, prior to the recent BSB test there, team boss Ian Lougher had also arranged a one-day test to give Tatsuya every chance to get as familar as possible with the Cheshire track.

Yamaguchi had a steady run in the first of two Free Practice sessions finishing in 16th, in the second session he improved by over three seconds to move up two places and Qualifying on Sunday would see him improve slightly further to finish 13th quickest in the Supersport class, but with the GP2 rider's times included it meant he was 18th on the grid for the Sprint Race later in the day.

The opening lap saw Tatsuya come through in a group of three other riders, and as the 12-Lap race unfolded he became embroiled in a mid-field scrap which at the halfway point of the race included at least six other riders with Yamaguchi lapping consistently in the 1min 41s.

With four laps to go Tatsuya was upping his pace into the 1:40s as he and Ben Wilson broke clear of the rest, and by the ninth lap they had opened up a cushion of almost two seconds on the chasing pack.

It was now a battle to the line with both riders giving 100%, and despite registering his fastest lap of the race on the last lap Tatsuya just missed out on 11th place by little under half a second.

Unfortunately cloudy and damp conditions greeted the paddock on Monday with the temperature barely above double figures, not ideal by any means.

With the race distance reduced by one lap to 15, the riders cautiously set off on their warm-up lap with a red flag soon giving an indication of how tricky things were.

When the race got underway Tatsuya was well down on the opening lap and with a lot of work to do as he was still 17th on the second lap.

A lap later he was up to 16th and with six laps gone he was still 16th but within touching distance of two riders in front.

At the halfway point Yamaguchi found himself in 14th and right on the exhaust pipe of Kurt Wigley with a further second back to the rest of the field, and on Lap 9 Wigley conceded two places promoting Tatsuya to 13th. By Lap 10 the Team ILR rider was on the move and up to 11th when the red flags again came out with a result declared.

Team ILR owner/manager Ian Lougher:
"Asa and myself had been trying for several years to coax Tatsuya across to the UK to try a BSB, but he was under a Honda contract for many, years so was unable to do so.
So when he was released from that we started to work on trying to make it happen.
His pedigree showed in his ability to adapt and learn the circuits so quickly, all the team were very impressed with his professionalism and especially with his feedback of the suspension settings on the R6 Yamaha.
Right now he's back home in Kyoto in Japan, but our aim is to drum up some more funds to get Tatsuya back in the team for some more BSB outings later in the year."

"I did not do a good qualifying at Silverstone round.

So even I could be faster during races, I spent too much time passing other riders. Therefore I could not have good results.
So I wished to have good set-up from qualifying at Oulton Park round. But it was very hard to learn racing line and up-down sector there, so I spent much time learning it.
So I could not have good qualify again there.
But I could make 1 second faster in the Race 1 than qualifying. So we tried to make best setting up for warm up session and felt pretty good about machine. But unfortunately, my grid position was not good again.
So I could not pass front riders again quickly, but finally I could pass a few riders. Then I could be closer to front group, but in that time red flag came out and finished Race 2. I really wanted to be better position and finish the race, so I was gutted.
But I am pretty happy with my lap time, so it gave me confidence.
I would like to thank for supporting this my challenge to KOKORO CARE, PlanBee, KUSHITANIi, ARAI helmet, Alpinestars, FixFit, Atto-Lance and Neu Intelesse. I will use what I experienced in this time for my future challenges and I keep this to do my best from now on too.
Finally, I would like to thank all Team I.L.R. with Mark Coverdale.
Thank you for supporting an opportunity to challenge BSB from Japan.
I was able to race with confidence, because you supported every sides.
Also, during my one month staying, you took good care of me, so I did not have to worry about my physical condition management. So I was able to keep my body fit and I could race without any physical problem.
And also thank you for thinking about my food! "