Strong Performances from Yamaguchi at Silverstone 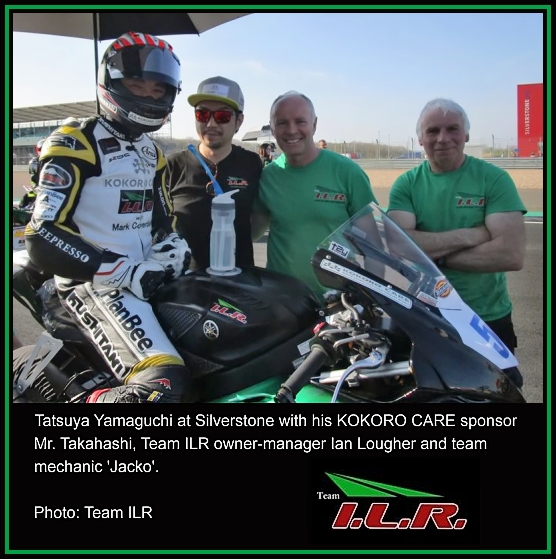 Japanese star Tatsuya Yamaguchi recently arrived in the UK for two appearances with Team ILR, the first of which came in the first round of the British Supersport Championship at a sun-kissed Silverstone National Circuit over the Easter holiday weekend.

Tatsuya only saw the Silverstone circuit for the first time when he tested there a few weeks previously with the team and he used Free Practice to feel his way around the fast, sweeping Northamptonshire circuit. He finished both practice sessions with a fastest time of 57.72 on the Team ILR / Mark Coverdale R6 Yamaha and he also had a run out on the team's BMW in the opening Superstock 1000 Free Practice session, but it was decided that he should concentrate his efforts on the 600.

Tatsuya went slightly quicker in qualifying to finish 13th quickest in the Supersport class to put himself on the sixth row of the grid for Saturday's Sprint race and he had a great battle with Eugene McManus and GP2 rider Jorel Boerboom for 14th in the race and he eventually finished 12th overall in the Supersports for a very solid start to his BSB experience.

The team tried a few different settings for Sunday's Feature race and the signs were good as Tatsuya registered his fastest lap of the weekend in Sunday morning's warm-up session to finish up eighth quickest.

He spent the early stages of the race in a relatively lonely 12th place but as the race entered the second half he began to close the gap to Ben Wilson, and with 10 laps to go Yamaguchi moved ahead and soon opened a gap on the Gearlink Kawasaki rider as he set his best lap of the race on Lap 20 with a 57.40.

Despite closing on Kurt Wigley in the latter stages, the gap was just too much to make up and Tatsuya came home in a very credible and confidence boosting 10th place in the Supersport class.

Team ILR owner-manager Ian Lougher:
"Silverstone was a very pleasing weekend for the team, and a lot warmer than last year's opening round at Donington Park!!
I was delighted with Tatsuya's performances on what was both an unfamiliar circuit and bike, and his sheer professionalism was a breath of fresh air.
He knew exactly what he wanted from the bike, and his feedback in every session enabled us to provide him with what he required.
His attitude impressed me right from the start and we all look forward to working with him again at the next round at Oulton Park.

First of all, I would like to thank Team ILR and Mr. Ian Lougher.
And also thanks to all my sponsors who support me in Japan.
Thank for all my fans to supporting me.
It was the first time to ride R6 and have never been on Silverstone circuit. But unfortunately the first test was rain condition, so very first dry session was the first practice in the race week.
So I rode 30 laps in one go for making sure my riding feeling.
So I could understood many things, then we could make some progress by it.
The setup was progressing gradually, but Race 1 I could not attacked very much, because setting up was not good enough yet.
But after it, I could have my best lap time during the warm up session.
The Race 2, every riders time are becoming slower because of heat, but I could keep my lap time good. But I made a mistake for starting and it was too late to recover after 20 laps. Anyway next round is Oulton Park, and it's will be my last chance, so I try my best for no regrets my BSB challenge!