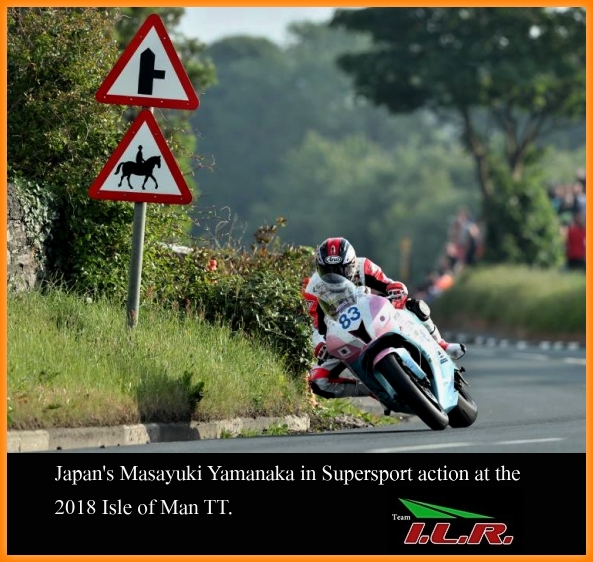 Team ILR are delighted to announce that experienced Japanese riders Tatsuya Yamaguchi and Masayuki Yamanaka will link up with the team during the 2019 season. Tatsuya will compete in the first two rounds of the British Supersport Championship at Silverstone and Oulton Park, whilst Masayuki will join the team for this year's Isle of Man TT races where he will be on board the Team ILR ZX-6 Kawasaki.
Masayuki Yamanaka is no stranger to the Isle of Man and he created history in 2015 when he was the first rider from Japan to step on to a Manx GP podium, after finishing a brilliant second in the Newcomers C race. He also registered a ninth place finish in the Lightweight event and was second best newcomer that year.
The 2016 Manx GP saw Yamanaka finish a very respectable 26th place in the Junior and Senior races with a personal best lap of 114.371 mph.

No doubt inspired by the heroics of Suzuki mounted Mitsuo Ito in the 1963 50cc TT (to date the only rider from Japan to win an Isle of Man TT) and many of his fellow countrymen before him, Masayuki loves the TT and in 2017 he overcame many previous obstacles, including a life threatening accident in his mid-40's, to finally realise his dream and make his debut at the world famous event where he finished 49th in the first Monster Energy Supersport race and lapping at just over 115mph. However he was to find the 2018 event challenging with a 56th place finish in the opening Supersport race and a DNF in the second.

Running his own team in recent years with a CBR 600 Honda, Masayuki feels he has more to offer around the 37.75 miles Mountain Circuit, and he has turned to the vast experience of ten-times TT winner Ian Lougher and his team to give him the extra push and guidance he feels is necessary to realise his full potential.


Tatsuya Yamaguchi certainly brings an impressive CV with him, and he has had one off rides at Moto GP (250cc in 1999 and Moto 2 in 2010) and at World Supersport level in 2002, the same year he won the MFJ All Japan JSB1000 Championship.

For his two appearances with Team ILR, Tatsuya will have a newly built Yamaha R6 at his disposal.

Team ILR owner-manager Ian Lougher:
"Team ILR have been talking to Tatsuya Yamaguchi for quite a number of years now regarding him trying some BSB events, but he had an ongoing contract with another manufacturer so it meant he had to ride for them in the UK, this made it very difficult for us to supply him with a relevant machine.
I have the utmost respect for Tatsuya as I know he has the speed to potentially rock the established stars at BSB level, but of course this puts some pressure on us to supply him with a really competitive bike.
Nonetheless we will put all our efforts into this and give him his best chance possible.
I think Yamanaka has struggled with chassis set up the last two visits to the Isle of Man, and this really does zap your confidence when you set off down Bray Hill.
I like to think with Team ILR's knowledge and past experience and rider nurturing, we can bring his confidence level up which will allow him to bring his lap times down in a safe manner."

Tatsuya Yamaguchi:
海外に挑戦をしたいと思っていたことが、２戦のみですが、実現することが出来て、嬉しく思います。何年も前からお話はさせて頂いて居ましたが、タイミングをみて今年は挑戦が出来ると思いました。BSBはレベルも高く、自分のスキルを上げる為の挑戦でもあり、様々な事を吸収していき、自身のteamでもあります、team t2yから挑戦出来る流れも作れたらなと思っています。まだまだライダーを辞める事は考えて居ません。ライディングスキルをあげるための挑戦に全身全霊で戦って行きたいと思います。
"I have wanted to compete some overseas racing for long time, so I am very happy to making it happen even 2 rounds of BSB.
I have been talking to Ian Lougher since few years ago, but I thought time has come in this year.
I know BSB is high level, so it is a challenge to raise my skills up, and also I want to learn various things.
Then I hope if some young riders of my own team t2y want to challenge BSB in the future, I want to make the way for them too.
I have never thought about retire from riding yet.
So I will race with my whole body and soul to raise my riding skill."

Masayuki Yamanaka:
尊敬するイアン・ロッカーさんのチームから出場することが出来て最高に幸せです。信頼しているチームなので、レースに不安は一切ありません。応援していただいている皆さんの為にそして自分の為に全力で頑張ります！
"I am extremely happy to be able to compete isle of Man TT with the team of Ian Lougher who I respect.
I trust him and his team, so I am not concerned anything about the races at all.
I will do my best with all my strength for the sake of everybody who is supporting me and for myself !"
.....................................