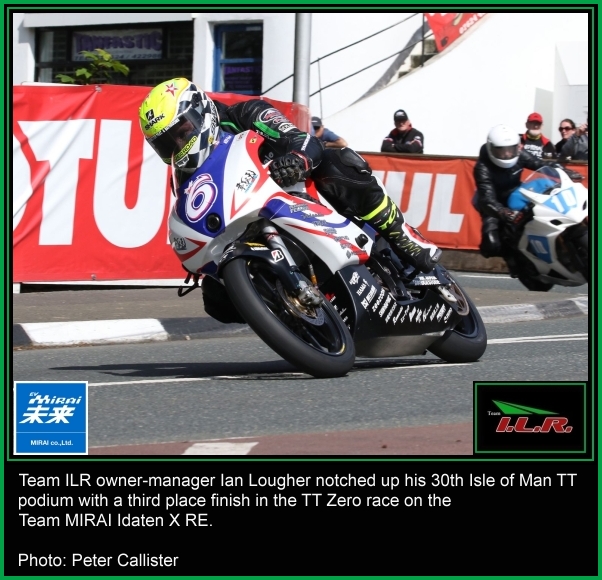 The dust has settled on the Isle of Man TT for another year, and there's no doubt it was a TT that was badly affected by poor weather and left many riders with very few laps under their leathers at the conclusion of practice week.

Ian Lougher and his team devoted a lot of time to the team's Japanese rider Masayuki Yamanaka and he went from a steady 109.52mph on the opening night's practice to record a lap of 114.417mph later in the week.

Race week duly arrived, and with the practice week having been decimated by the weather, bike set-up had become something of a lottery. Masayuki made up for the disappointment of a non-finish in the first Supersport TT to ride well in the second race to record a lap of 115.659mph, his fastest lap around the TT course.

On the second and last flying lap Saiger in 10th and Lougher (12th) went through Glen Helen together on the road with James in 11th being closely followed on the road by Dominic Herbertson. Positions remained the same at Ramsey and they finished in that order, with Yamanaka finishing in a very credible 23rd.

That left the TT Zero race as the final one on the cards for the team.

Over the past few seasons Ian Lougher has forged close links with Team MIRAI and he was again entrusted with riding their Idaten X RE which was entered in the race in association with Team ILR and Mark Coverdale.

After a disappointing Lightweight TT by his own high standards, Ian displayed true professionalism and at the end of the one lap race it was a popular return to the TT podium for Lougher as he joined race winner Michael Rutter and second placed John McGuinness on what was his 30th TT rostrum, a remarkable feat and just rewards for the hard working Team MIRAI outfit.

In closing, the thoughts of everyone at Team ILR are with the family and friends of Daley Mathison who sadly lost his life at the TT, and we wish a speedy recovery to all those injured.

Horst Saiger ~
"After the NW200 I knew that the Paton 650 is a pretty good bike, but I also knew immediately that we need more time to find the best setup and even more important that I get more riding time to adapt my style and to show lap times that do justice to the Paton 650. But the IOM weather had other plans with us, so I was still far away from the potential of this fantastic bike.

At the end I need to say thanks to Ian, Mark and Jacko for giving me the best Supertwin that is possible and a 10th place in the race was equal to my best ever result at the TT.

My favorite moment of the racewas when I saw my boss Ian in front of me and when I passed him I had a big smile under my helmet - sorry for that! ;) In Practice Michael Dunlop and Jamie Coward passed me, so I saw how fast a Supertwin can be ridden, so I've to work on that for the next races."

"Thank-you very much for having me as member of Team I.L.R. with Mark Coverdale.
This TT weather was very bad, so there was not enough track time.
But even in that condition, I could race with out any pressure.
It's because with Ian's mentoring, all team member worked hard and relaxing atmosphere in the team.
I really appreciate it from bottom of my heart.
I  wish I can compete TT again with the team for next year.
Thank you very much."

James Chawke ~
"Well that's my first ever TT done and dusted and what a TT it was! As you all know the weather wasn't on our side and we struggled to get practice in but we made the most of it.heading into race day and we were good to go as it was only a 2 lap race. It was hard and I rode on my own and I was delighted to finish 11th at a lap speed of 16.5. I can't thank Mark Coverdale and Team ILR for all their help and support. I'd also like to thank my own lads for all their hard work over the duration of the TT, Carl Roberts, Liam Chawke and Richie Kelly.
Thanks a million to everyone who helped make this journey possible."

Team ILR owner-manager Ian Lougher ~
"I must say the weather and delays this year made it the hardest TT I can remember, I think especially as a team manager it makes it so much more tiring when you're hanging around waiting for things to happen then only to be told the schedule has changed again. I think the organisers did a great job, but it's so difficult in these safety sanitised days we live in.
I was really pleased to work and help Yamanaka san and see him progress and learn, he's so dedicated going out every morning at 4am in his car to learn the circuit, and so appreciative to the whole team. I look forward to working with him again.

Horst had a good race considering he had limited practice and time on the bike and became our top rider in 10th position. I think he was happy, but it's hard to tell sometimes with Horst!

James (Chalkie) is a real star for the future, he's hard working, dedicated, fast, and easy to get on with...a team managers dream rider. There's a lot more to come from him in the future, I'm sure. I myself was obviously very pleased with my 3rd place in the electric race, especially for Team MIRAI as this was their first podium and it was just rewards for all their hard work. The Moto 3 chassis it uses suited me down to the ground. To say I was disappointed with my ride on the Paton was an understatement..we tried a different ride height set up and it just didn't work, making it errm....very interesting to ride on certain sectors. I'm sure I had the Marshalls running for cover coming into Ramsey on one lap, it was a bit sketchy to say the least!!
I'm not sure if it was all the waiting around that lost my interest or what it was, but it all seemed a bit of a joke being a 2 lap race after sooo much work and preparation, especially with the bikes being so late arriving (thank you Mr Mark Coverdale for picking them up in Calais just 3 days before the North West 200 started!!!) top man and top sponsor."