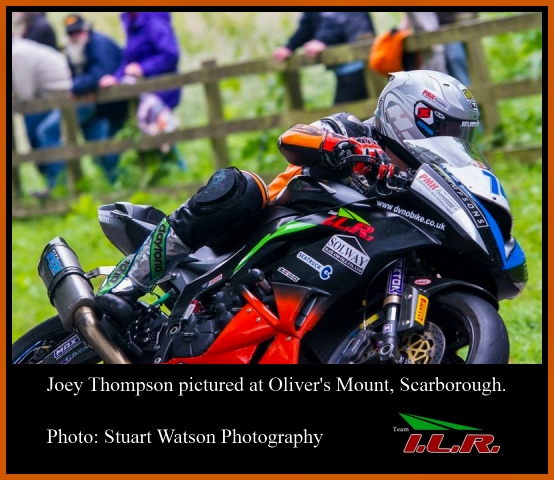 Joey Thompson continued his pure road racing season when he took part in the Barry Sheene Road Race Festival at the weekend at Oliver's Mount, Scarborough, a circuit on which he has always ridden particularly well.

This meeting was no exception, and on a weekend which at times was badly affected by poor weather, the young relative newcomer to this particular discipline of the sport came away from the meeting with more solid performances including two wins and a further podium place.

On a particularly tough first day due to the weather, Joey managed two top ten finishes, 6th in the Junior 600 (4th fastest lap) and 8th in the Solo Open races (second 600 rider) respectively.

On Sunday, the Auto 66 club re-scheduled the  to fit in the six races which were unable to be run on Saturday, so a busy day lay ahead.

The action got underway at 9 am on a drying circuit, and Thompson got his day's action off to the perfect start when he romped to a start to finish victory in the Lightweight race by over half a minute and claiming the fastest lap of the race.
With Team ILR mechanic Jacko and his dad John providing the crucial support, it was a repeat performance in the second Lightweight race when Joey again was never headed to win by almost 24 seconds on the immaculate JTR Thompson TZ250 Yamaha and again post the fastest lap.

Sandwiched between the two wins was a superb ride in the second Junior 600 race of the weekend where Joey took second place on the Team ILR ZX-6 Kawasaki, 2.44 seconds behind Jamie Coward and almost a second and a half clear of third placed James Cowton.
Particularly pleasing was Joey recording his personal best 600  around Oliver's Mount, which also gave him the fastest lap of the race and the event record which was held by Daley Mathison from the previous day.

Thompson concluded his weekend with another impressive ride to take fifth in the Senior Open event where he was the highest placed 600  and was the third fastest rider in the race.

From the Yorkshire coast, Joey now heads to Northern Ireland where he will be joined by his mentor and Team ILR owner/manager Ian Lougher as they both make their debuts at the  Road races this weekend.